Abstract : Preparations are in full swing for the third China International Import Expo (CIIE), scheduled to open in early November this year. The event is likely to instil confidence in the business environment as COVID-19 clobbers the global economy.

— Preparations are in full swing for the third China International Import Expo (CIIE), scheduled to open in early November this year.

— The event is likely to instil confidence in the business environment as COVID-19 clobbers the global economy.

— The CIIE is the first dedicated import exhibition in the world and has seen fruitful outcomes in the past two editions.

SHANGHAI, July 26 (Xinhua) — Preparations are in full swing for the third China International Import Expo (CIIE), scheduled to open in early November this year. The event is likely to instil confidence in the business environment as COVID-19 clobbers the global economy.

The CIIE is the first dedicated import exhibition in the world and has seen fruitful outcomes in the past two editions. 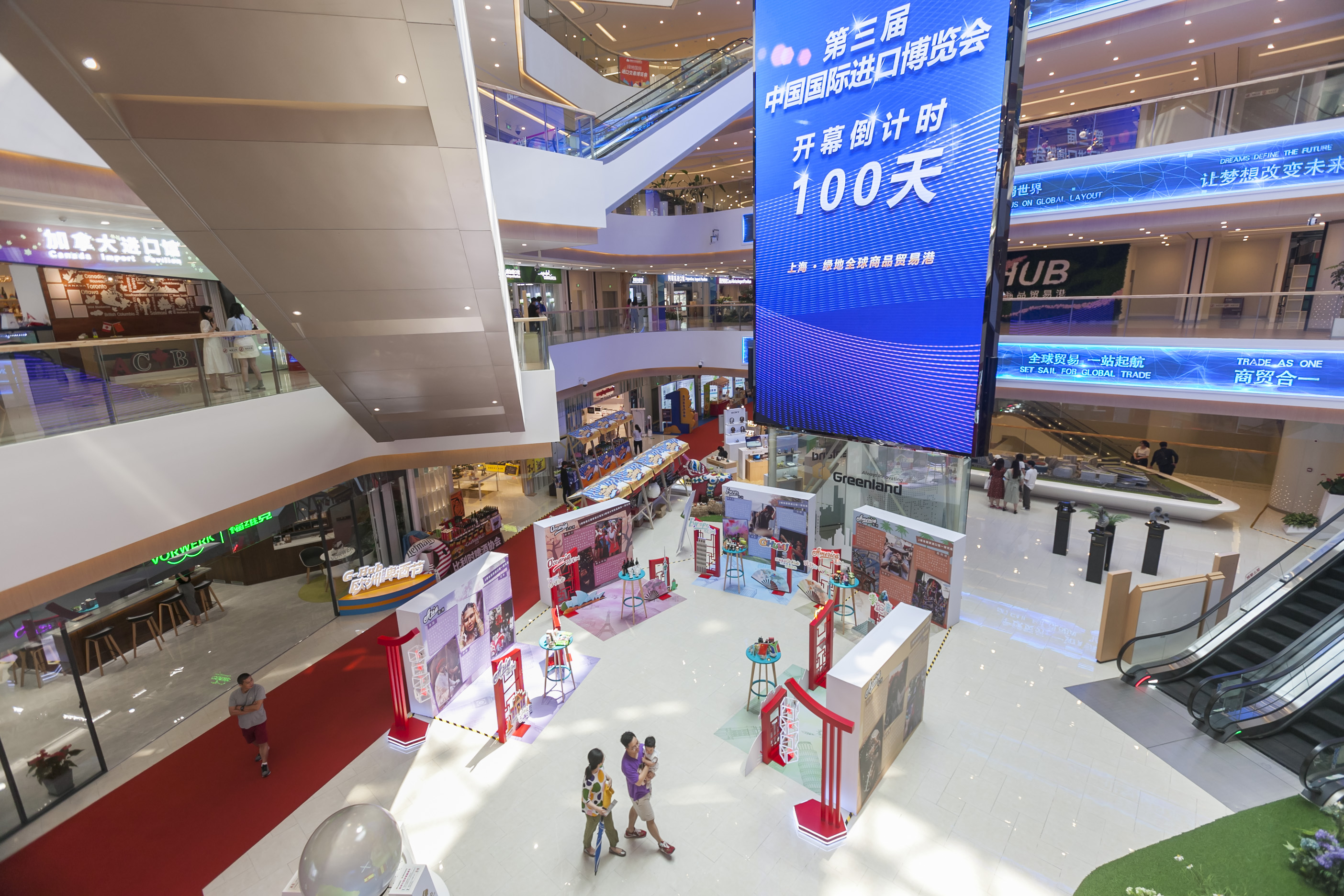 This year, the average exhibition area for the world’s top 500 companies and industry leaders will increase by 14 percent from last year, Sun Chenghai, deputy director of the CIIE Bureau, said at a press briefing on Friday. “It reflects a broad recognition of both the CIIE and the Chinese market,” Sun said.

Four new zones for public health and epidemic prevention, energy conservation and environment protection, smart transportation, as well as sports goods and competitions will be set up at the event, according to Sun, who said that the number of top enterprises scheduled to participate has already surpassed that of previous editions with many latest products and technologies set to debut.

For this year’s expo, some signing ceremonies and roadshows have been moved online to facilitate participation due to the novel coronavirus outbreak.

Leading tire manufacturer Michelin is scheduled to take part in this year’s CIIE for the first time after visiting the previous two expos.

“CIIE is the first national-level expo worldwide focusing on import and a breakthrough in international trade,” said Kamran Vossoughi, president and CEO of Michelin Greater China. “Michelin hardly participates in any expo directly, but this year we will showcase our vision in sustainability,” Vossoughi said. 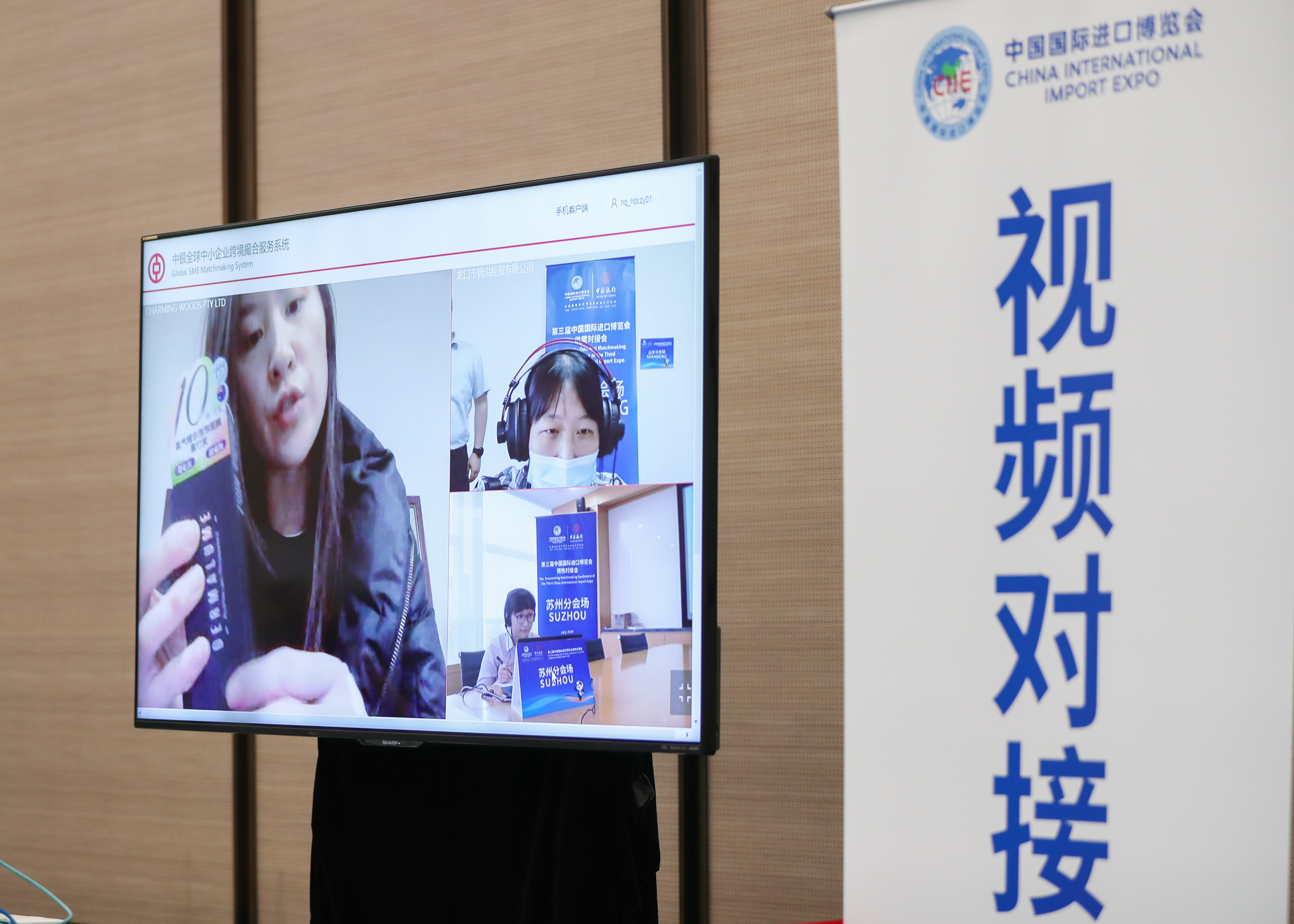 The CIIE participants communicate online during a supply-demand matchmaking activity for consumer goods ahead of the 3rd CIIE in Shanghai, east China, July 10, 2020. (Xinhua/Ding Ting)

Joerg Uwe Hille, with Carl Cloos Schweisstechnik GmbH, a Germany-based welding company with over 100 years of history, said the online roadshow was productive as it provided first-hand information.

“The CIIE provided such a great platform for us to form business relations and contracts. We will expand our exhibition booth to 100 square meters this year,” Hille said.

Authorities in Shanghai have worked together to streamline clearance procedures and lower costs for enterprises while staying vigilant for epidemic prevention and control for this year’s expo.

The past two expos have proven that the event is a great window for global players to tap into the Chinese market and also a testimony of China’s commitment to opening-up and quality development.

“We benefitted a lot from last year’s CIIE. It really showed us that China is gearing up the opening-up,” said Naoko Hase, head of corporate strategy division at Shiseido China Co. Ltd. She said the company was impressed with the outcome of the last CIIE. Shiseido signed a three-year MOU with CIIE Bureau earlier this month, which means the company will attend the annual event for the next three years.

“The COVID-19 pandemic did not affect Shiseido’s confidence in the Chinese market, and we will further strengthen investment in China in the future,” she said, adding that the company in March announced it will launch an R&D center in Shanghai.

The Japanese cosmetic giant will showcase luxury brand The Ginza for the first time on the Chinese mainland, and exhibit a newly-launched skincare brand BAUM outside Japan for the first time during the coming CIIE, according to Hase.

French food giant Danone was among the first to sign a long-term contract with the CIIE Bureau.

The company opened a new science research center in Shanghai earlier this month, demonstrating its continued confidence in the Chinese market.

Bruno Chevot, senior vice president of Greater China & Oceania at Danone Early Life Nutrition, said the new center will allow the company to work closely with the Chinese public and private sector, universities and professionals to speed up innovation. “The results of our research here will not just be used in China, but also be exported to the rest of the world,” Chevot said. 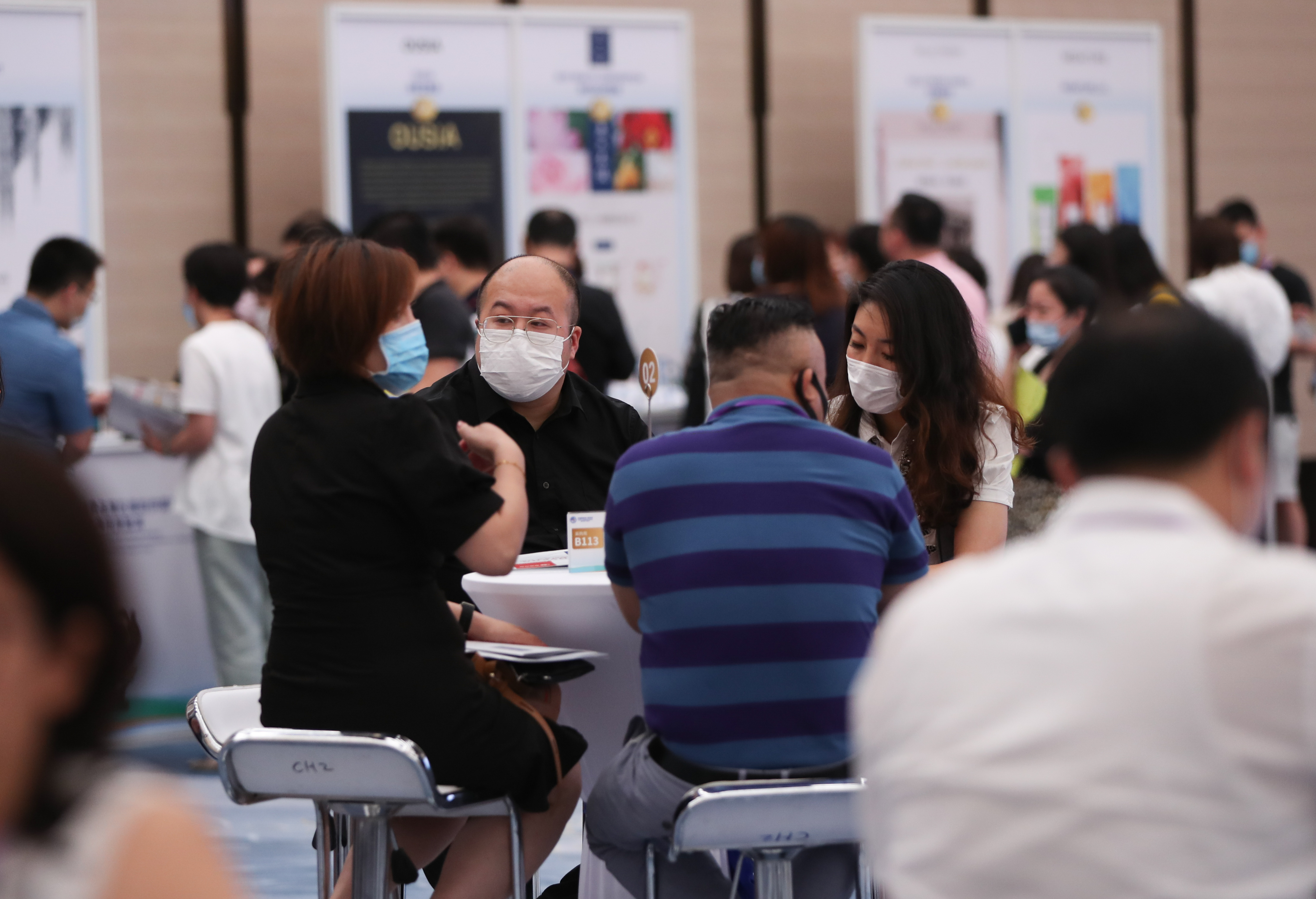 People participate in a supply-demand matchmaking activity for consumer goods ahead of the 3rd CIIE in Shanghai, east China, July 10, 2020 (Xinhua/Ding Ting)

“The opening of the center and our commitment to CIIE are testaments to China and Shanghai’s strength and capabilities as an innovation hub and economic center,” Chevot said, noting that Danone will bring its latest innovation and scientific research findings to this year’s CIIE.

As the world’s first import-themed national expo, the CIIE has become a name card of China’s greater opening-up measure. With the world still struggling to recover from the fallout of the COVID-19 pandemic, the third CIIE is set to inject confidence into the sluggish global economy.

Last year’s CIIE saw a total of 181 countries, regions, and international organizations participate in the expo, and more than 3,800 enterprises participated in the exhibition. Meanwhile, a total of 71.13 billion U.S. dollars worth of tentative deals were reached for a year’s purchase of goods and services during the last CIIE, an increase of 23 percent from 2018.

“Thanks to the slew of supportive policies issued by the central and local governments to boost consumption growth and energize the market, we are seeing that the Chinese economy is returning to steady growth following COVID-19,” Agarwal said.

According to an IMF projection, China is expected to achieve what could be the sole positive annual GDP reading among major economies.

Chinese consumers’ rising appetite for imported goods has encouraged more foreign companies to participate in the CIIE and promote products tailored to the needs of the country’s consumers. 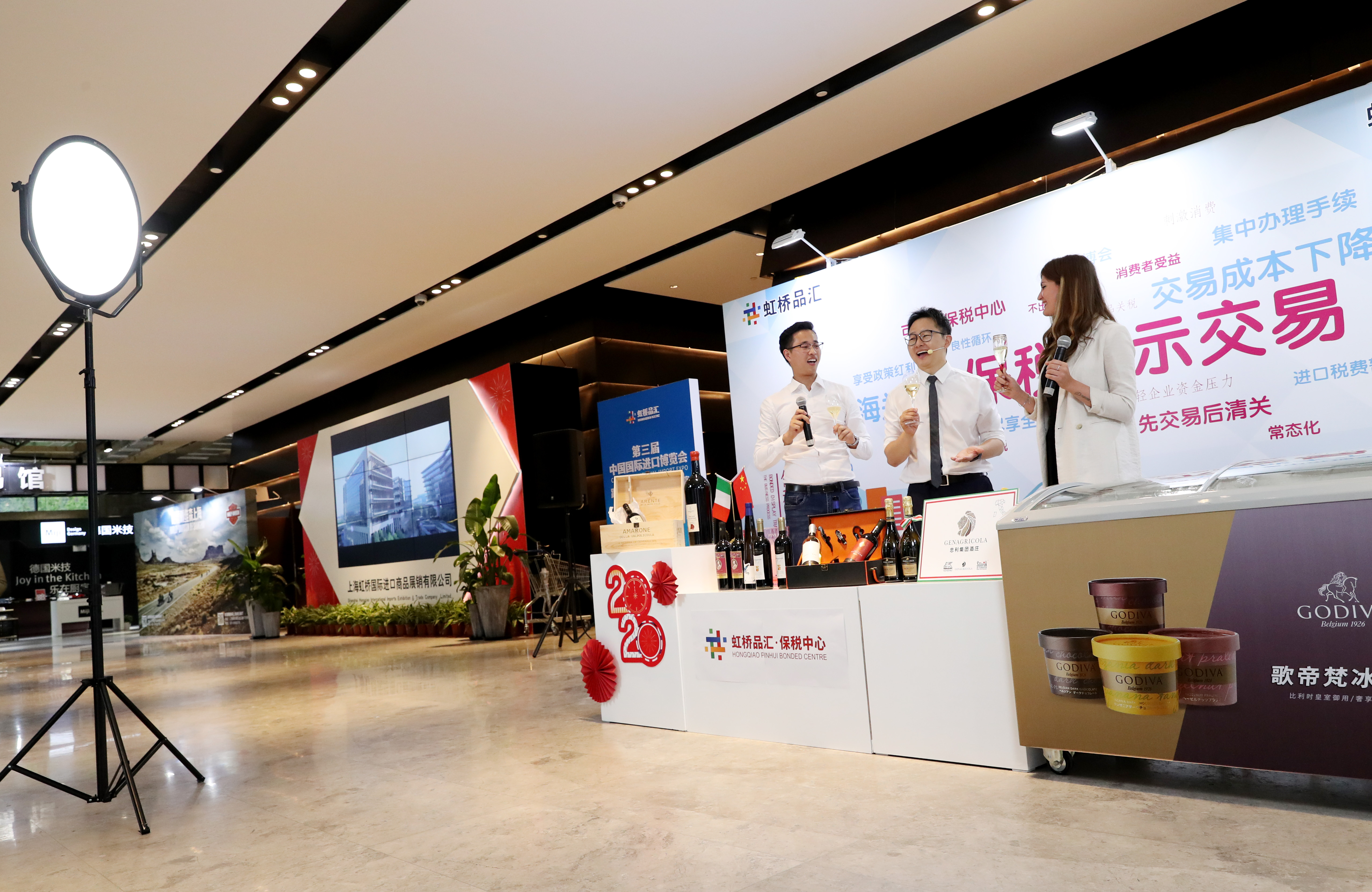 “We were told that most Chinese consumers were unfamiliar with Italian liquor, and it is easier to make headway with smaller bottles — a lesson we learned from the CIIE,” she said.

Despite the impact of COVID-19, foreign companies are still upbeat about the long-run potential of the Chinese market.

“China is one of the most attractive markets for Henkel and plays a strategic role in our global business,” said Agarwal.

“Henkel is eagerly looking forward to participating once again in the CIIE and to having the opportunity to engage more closely with consumers and partners in China at this flagship event,” Agarwal said.