Abstract : A Bangladesh clinic practicing traditional Chinese medicine (TCM) has won trust and gratitude from its many patients. 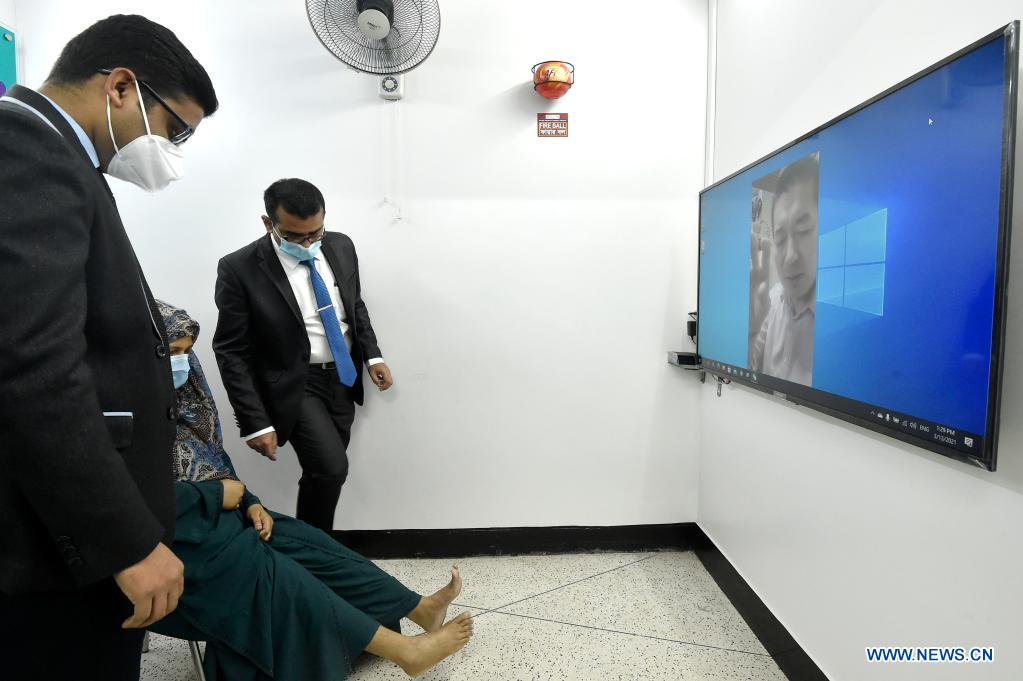 A patient communicates with a medical specialist in China via video link, at a clinic in Dhaka, Bangladesh, on March 13, 2021. A Bangladesh clinic practicing traditional Chinese medicine (TCM) has won trust and gratitude from its many patients. In 2019, the clinic of Suoxi Healthcare Limited opened in Dhaka. Here, trained local medical staff, including professionals who returned with hands-on experience from study in China, provide patients with various TCM treatments such as acupuncture and tui na or Chinese therapeutic massage. (Xinhua)

DHAKA, March 25 (Xinhua) — A Bangladesh clinic practicing traditional Chinese medicine (TCM) has won trust and gratitude from its many patients.

In 2019, the clinic of Suoxi Healthcare Limited opened in Dhaka, the capital of Bangladesh. Here, trained local medical staff, including professionals who returned with hands-on experience from study in China, provide patients with various TCM treatments such as acupuncture and tui na or Chinese therapeutic massage.

In treating patients with various conditions, Mohammad Shahib Sheik, who is in charge of the clinic’s operation, said, “We take advice from Chinese specialists for seriously illed patients.”

“We take advice through video calls with specialist doctors in China. That’s one way we do it here,” he said.

Firoz Kibria, a retired government official, said he had suffered from migraine for a long time. “After taking the TCM treatment, I’m completely fine.”

Many Chinese people also visit the clinic. Among them, Wang Jianke comes here to threat sciatica.

“I have taken the TCM treatment here for five days. Now I feel very good. I think TCM in pain management is very effective and it will help Bangladesh people,” he said.

Farid Ahmed, a Bangladesh post ministry official, said he has tried physiotherapy many times in many places but in vain to ease his back pain.

However, in Suoxi, “After treatment for two to three days, I felt better,” he said.

“When I came to this clinic I felt it was different from other centers,” he said. “This center was well equipped with devices.”

Mahbubur Rahman, joint secretary of Bangladesh Ministry of Road Transport and Bridges, said longtime sitting daily for office work has led to pain in his lower and upper back and spine problems.

“I have taken a lot of painkillers … I have gone to many doctors. Finally I came to know about this clinic. I came here and have taken therapy,” he said.

“I feel better. I’m pleased with the treatment here. TCM is good for health, as pain killers have many side effects,” he noted.

He said he thinks more Chinese doctors should come to Bangladesh, adding, “It will be good for people of Bangladesh.”

He got the undergraduate degree of MBBS (Bachelor of Medicine, Bachelor of Surgery) in a medical university in Wuhan city in central China after five years of study. He said he also took an “internship training on acupuncture in the university’s TCM department.”

“I graduated from Tongji Medical University in Wuhan,” he said, which is a college under Huazhong University of Science and Technology from 2000.

He said more Chinese medical technologies should be brought to this country.

According to him, Shahib Sheik, who had been to China, was among the people who inspired him to study traditional Chinese medicine.

“They created the Suoxi foundation which supported me in communicating with China, and help them with any of the Chinese treatments,” he said.

He said he has many ideas for the development of traditional Chinese medicine in Bangladesh, including the plan for establishing an acupuncture association in order to promote the Chinese acupuncture practice and technology in the Asian country.

He also believes it is necessary to provide TCM healthcare services in the country’s rural areas. Enditem