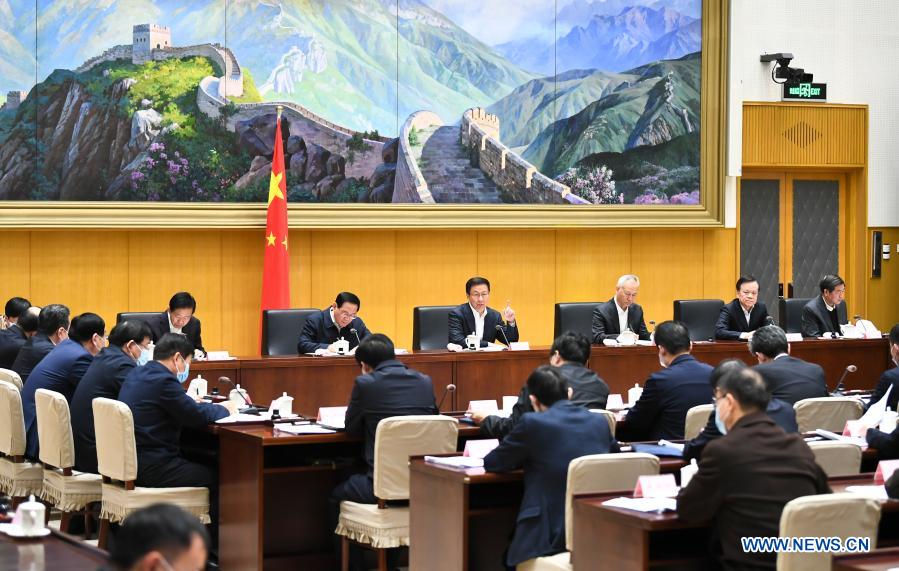 Chinese Vice
Premier Han Zheng, also a member of the Standing Committee of the
Political Bureau of the Communist Party of China Central Committee,
chairs a meeting on promoting the development of the Yangtze River
Economic Belt in Beijing, capital of China, Dec. 1, 2020. (Xinhua/Xie
Huanchi)

Han made the comments on Tuesday while chairing a meeting on
promoting the development of the belt. He called for unswerving
adherence to new development philosophies, sticking to target-oriented
and problem-oriented principles, and focusing on major tasks, such as
pollution treatment and the implementation of a 10-year fishing ban
along the Yangtze.

During the meeting, a video was played to expose problems concerning
the ecological environment along the Yangtze River Economic Belt. The
video was produced on the basis of investigations in 11 provinces and
municipalities along the belt.

Despite great achievements made in the development of the Yangtze
River Economic Belt, the situation of its ecological and environmental
protection remains serious, Han noted, citing an imperfect oversight
mechanism and inefficient development methods at local levels.

More efforts should be made to strengthen the protection and
restoration of the ecosystem, and carry out pollution treatment
initiatives, as well as the 10-year Yangtze River fishing moratorium,
which started from the beginning of the year.

He also called for efforts to facilitate comprehensive transport
integration and integrated regional development, while expanding
opening-up in an all-round way.