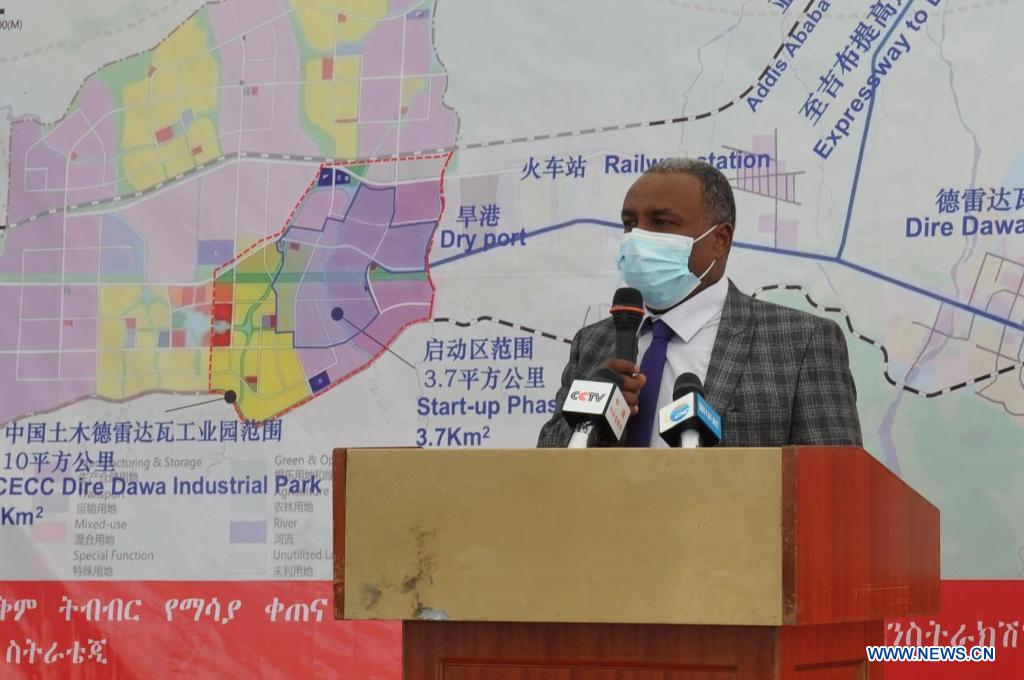 The first-phase construction of the Park is to be on 370 hectares of land on the outskirts of Ethiopia’s second-largest city Dire Dawa.

“We would like to thank you for coming here and investing your capital in Dire Dawa as this will help the local community in technology transfer as well as job opportunities for the youngsters and actually developing the Dire Dawa city administration,” the mayor said.

The Park will be built along the 752.7-km Ethiopia-Djibouti standard gauge railway and is expected to enjoy ease of access to the international market. Ethiopia’s neighboring Djibouti port presently handles about 90 percent of Ethiopia’s overall export-import trade.

“CCECC is participating in various mega projects in our country. The company is developing the majority of industrial parks in our country, in which the just launched CCECC Dire Dawa Industrial Park is one of them,” Daniel Teresa, Deputy Commissioner of the Ethiopian Investment Commission (EIC) told Xinhua.

The industrial park will eventually expand to 1,000 hectares of land when operating at its full capacity, according to the CCECC.

Li Minggang, Deputy General Manager of CCECC Ethiopia Construction plc, on his part said the industrial park, as the pioneer industrial park of the Dire Dawa Special Economic Zone, is aiming to become a demonstration platform for the cooperation between China and Ethiopia.

Li said the industrial park aspires to promoting local employment, improving the living environment, and optimizing logistics supporting facilities in the area and beyond.

Ethiopia currently has 13 operational industrial parks, with several more under construction expected to be commissioned during the current Ethiopian Fiscal Year 2020/2021.

Chinese companies are the major players in Ethiopia’s ambitious industrial parks development, which form part of the country’s broad economic strategy to make it into a light manufacturing hub in Africa by 2025.

The Ethiopian government in March this year announced that it has earned some 610 million U.S. dollars in export revenue from industrial parks during the first nine months of the current 2020-21 Ethiopian fiscal year that started on July 9, 2020.

According to figures from the Ethiopian Industrial Park Development Corporation (IPDC), the revenue was earned from the exports of apparel and other products by companies operating across 13 industrial parks targeting global markets including the United States and Europe.

The industrial parks have also created in excess of 89,000 employment opportunities for Ethiopia’s burgeoning youth population, the IPDC said. Enditem