Abstract : China will provide more opportunities for mutually beneficial cooperation for all countries, and will contribute more to the stability and prosperity of the post-pandemic world, a Foreign Ministry spokesperson said Wednesday. 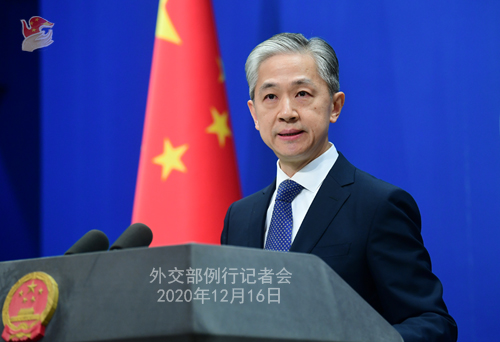 BEIJING,
Dec. 16 (Xinhua) — China will provide more opportunities for mutually
beneficial cooperation for all countries, and will contribute more to
the stability and prosperity of the post-pandemic world, a Foreign
Ministry spokesperson said Wednesday.

The
constant inflow of foreign direct investment (FDI) into China
demonstrates the world’s confidence in China’s economic prospect and the
outcome of China’s endeavor to forge a new development paradigm and
expand opening up, spokesperson Wang Wenbin told a press briefing when
commenting on recent remarks by foreign media outlets and institutions
about China’s facilitating role in the global economic recovery, as
indicated by the growth of China’s actual utilized FDI for eight
consecutive months.

Wang
said over the year, China has not only opened up broad space for its
economic development but also injected strong impetus into world
economic recovery, citing China’s implementation of Foreign Investment
Law and related regulations, the shortening of negative lists applied to
pilot free trade zones, and the release of a master plan for Hainan
free trade port.

China
has become the largest trading partner with the Association of
South-East Asian Nations, the European Union and the United States,
according to Wang.

For
the first three quarters of the year, China has witnessed a 29.7
percent increase of the direct investment in non-financial sectors in
Belt and Road countries, and the Organization for Economic Cooperation
and Development predicted that China is expected to account for over
one-third of global economic growth in 2021, the spokesperson said.

“As
China opens its door wider to the outside world, it will create more
opportunities of mutually beneficial cooperation for all countries, and
contribute more to the stability and prosperity of the post-pandemic
world,” Wang said.