Abstract : China and Kiribati looked forward to further development of the bilateral relations while celebrating the first anniversary of the resumption of the diplomatic ties. 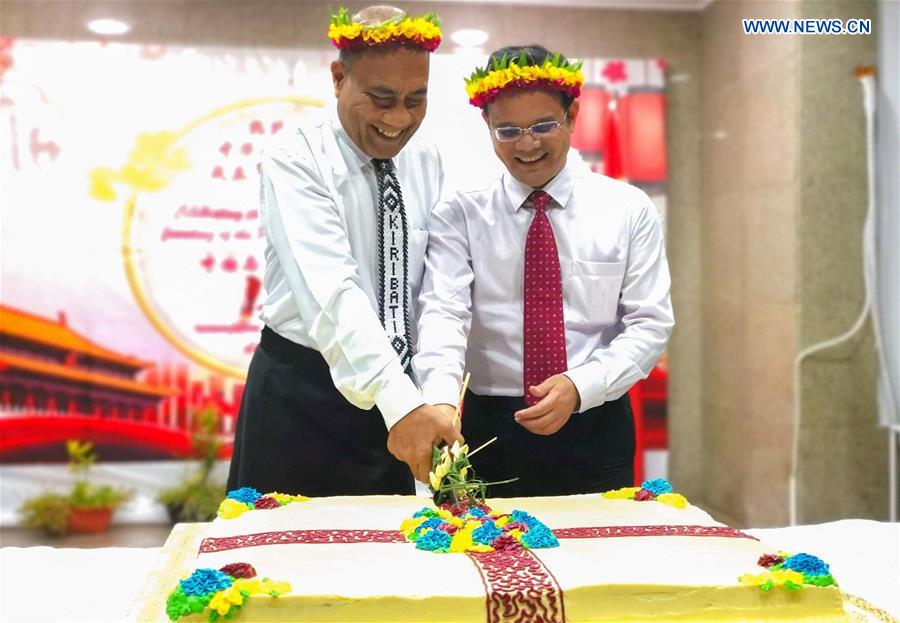 President of Kiribati Taneti Maamau (L) and Chinese Ambassador to Kiribati Tang Songgen jointly cut a cake during a reception marking the Chinese National Day and the first anniversary of the resumption of diplomatic ties between China and Kiribati, in Tarawa, Kiribati, Sept. 25, 2020. (Xinhua)

SYDNEY, Sept. 26 (Xinhua) — China and Kiribati looked forward to further development of the bilateral relations while celebrating the first anniversary of the resumption of the diplomatic ties.

“One year ago, the seed of China-Kiribati cooperation was sowed when Kiribati made the historical decision to resume the diplomatic ties with China. Now the seed has grown up into a strong sapling tree under the care from both sides,” said Chinese Ambassador to Kiribati Tang Songgen.

Tang made the remarks at the reception marking the Chinese National Day and the first anniversary of the resumption of diplomatic ties held by the Chinese embassy in Kiribati on Friday evening in Tarawa, capital of the south Pacific island country.

Tang spoke highly of the fruitful cooperation conducted by the two countries in many areas including trade, green energy, agriculture and fishery, education, health and cultural exchanges, which benefited the people in Kiribati.

He said facts proved that the resumption of the diplomatic relationship between China and Kiribati conforms to the trend of the times and is in the fundamental interests of the two peoples. The Chinese side will work with the Kiribati government to deepen the bilateral cooperation on the basis of mutual respect, equality and reciprocity.

President of Kiribati Taneti Maamau recalled the resumption of the diplomatic ties in September 2019 as “a bold and decisive step to start a new journey.”

“This is a journey founded on mutual respect and friendship … and adhere to my government’s commitment to the one-China principle,” Maamau said.

He said the fruits of bilateral cooperation since last September have been a constant reminder of the greater good the two countries can achieve through partnership, and expressed gratitude for China’s support to various sectors.

“The reopening of the embassy in May this year is a testament of China’s continued commitment to Kiribati and we looked forward to opening our mission in Beijing in the near future,” he said.

“Tonight we looked back on the tangible outcomes that we have accomplished together and reaffirmed our commitment for the boundless opportunities for our cooperation,” Maamau said.