Abstract : China's internet industry has seen robust growth in recent decades, but its data centers, large-scale servers and cellular base stations are consuming energy at a faster pace. Hence, China's tech firms have started to work on green solutions. Photo shows the Tencent Qingyuan Data Center with low-energy consumption, which was put into operation on July 3, 2020. (Xinhua/Chen Yuxuan)

“The electricity consumption of China’s internet industry is growing at an annual rate of about ten percent. It will double in seven or eight years, and become a major source of energy consumption in the future,” Prof. Wang Yuanfeng of Beijing Jiaotong University told Xinhua.

Wang, a carbon emission reduction expert and an advocate of green development, said enterprises in the sector should act quickly to build greener internet infrastructure.

China’s tech giants, such as Huawei and Tencent, have been trying to build a zero-carbon internet industry.

In Mobile World Congress Shanghai 2021 held in February, Huawei unveiled its solution for zero-carbon network, including minimalized base stations, server rooms, data centers and wide use of green electricity. 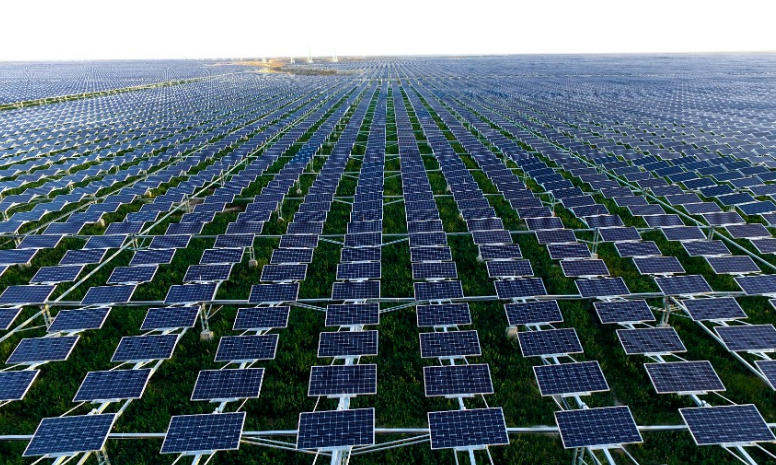 Photo shows photovoltaic panels in the Ningxia agricultural-photovoltaic integrated industrial Base, which is supported by Huawei Technology.(provided to Xinhua)

Vice President of Huawei and President of its Digital Power Product Line Zhou Taoyuan said Huawei can reduce energy consumption by using high-performance, low power-demand and highly-integrated servers, and minimizing the room occupation of base stations.

Senior Vice President of Sugon Energy Yao Yong believes that the improvement of liquid cooling technology is the best way to break the bottleneck of data center energy efficiency.

“It can improve servers’ stability, efficiency and service life, and improve the deployment density of servers. The data centers can be more environment-friendly with less noise and more recycled spare heat.”

PUE is a measure of how efficiently a computer data center uses its power. The lower the PUE, the greener the data center.

In 2019, China’s Ministry of Industry and Information Technology, National Government Offices Administration and National Energy Administration jointly issued a guideline to promote green data centers, proposing that by 2022, the PUE value of the country’s newly-built large and super-large data centers should be below 1.4.

All these measures are a part of the country’s efforts to achieve green and high-quality development.

According to this year’s government work report, China will draw up an action plan to peak carbon emissions by 2030 and improve its industrial structure and energy mix.

Tencent has adopted “tri-supply” technology to combine the supply of power, heating and cooling in its data centers to improve the comprehensive efficiency of energy use.

Tencent said just the use of “tri-supply” in its data centers can save 3,500 tonnes of standard coal and cut 23,300 tonnes of carbon dioxide emissions every year, which is equivalent to planting 36,000 trees every year.

Even a small improvement in energy usage efficiency of internet infrastructure will make a big difference after long-time service of equipment, Wang Yuanfeng said.

According to Huawei, its green power generation and efficient electricity consumption sectors have generated 325 billion kWh of green electricity so far and saved 10 billion kWh of power, equivalent to planting 220 million trees.

Pony Ma, chairman of Tencent and a deputy to the 13th National People’s Congress (NPC), put forward a proposal on the peaking of carbon emissions and carbon neutrality during the fourth session of the 13th NPC.