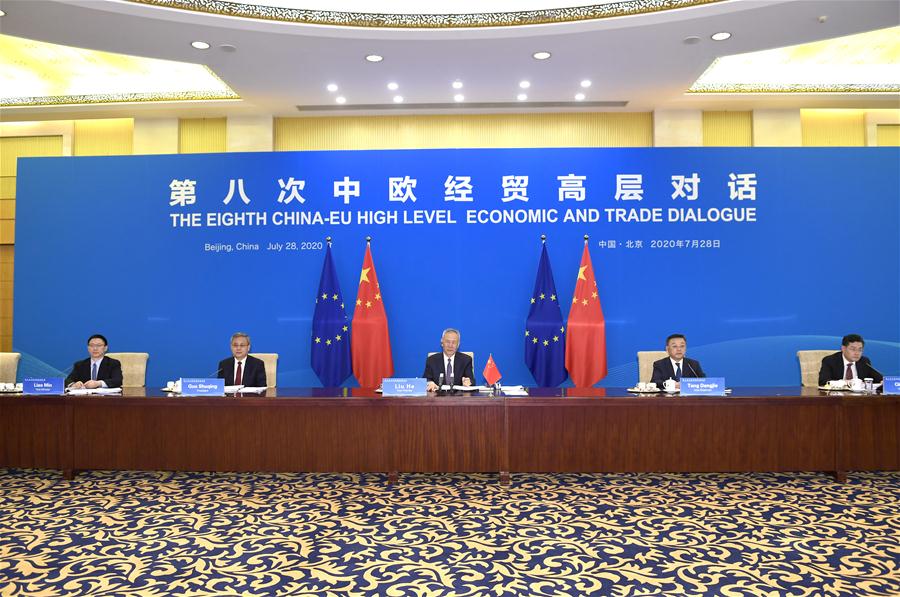 Chinese Vice
Premier Liu He, also a member of the Political Bureau of the Communist
Party of China Central Committee, co-chairs the 8th China-EU High-level
Economic and Trade Dialogue with Valdis Dombrovskis, executive vice
president of the European Commission, via video link on July 28, 2020.
(Xinhua/Yue Yuewei)

Liu made the remarks during the 8th China-EU High-level Economic and
Trade Dialogue, co-chaired via video link with Valdis Dombrovskis,
executive vice president of the European Commission.

Noting that this year marks the 45th anniversary of the establishment
of China-EU diplomatic relations, they said the China-EU High-level
Economic and Trade Dialogue was of great significance against the
backdrop of COVID-19 and the severe impact on the world economy.

The two sides agreed to work together to implement the important consensus reached between their leaders.

They agreed to enhance mutual understanding, create certainty amid
uncertainty, enhance market confidence, and jointly promote China-EU
economic and trade cooperation to a new level in the post-epidemic era.

Liu said the COVID-19 epidemic was a common challenge for humanity.
“As two major global economies, China and Europe jointly promote global
unity in fighting the pandemic, promote the economic recovery, and
jointly safeguard multilateralism and the free trade system, which is
beneficial to China, Europe and the whole world,” he said.

Dombrovskis said the EU and China were important cooperative
partners, and promoting the development of EU-China relations was in the
common interests of both sides. Enditem